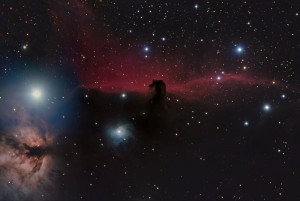 This image clearly depicts the well-known red glow that appears to come from being the horsehead, produced by hydrogen gas that has become ionized by neighbouring stars. The photograph draws particular attention to the cloud of heavily concentrated dust within the horsehead, which is silhouetted against the red glow as it blocks so much of the light that is trying to get through.